Since 1997 there has been a transformation in the way that people communicate. In 1987, in America alone over a million people had mobile phones. In 1997, the figure was 55 million[1]. The International Telecommunication Union estimated[2]that there will be 5.9 billion mobile subscriptions by the end of 2011, which is equivalent to some 87 percent of the world population (79 % in developing countries).

Accessing the internet from mobiles is increasingly the norm, not just in countries such as Egypt, India and Kenya where over 50 percent only access the web from their mobiles, but also in the US where 25% of web users only access from mobile devices[3]. This has had a remarkable effect upon people’s lives and the way people learn, work and play and the next ten years will see even more profound changes.

The rise of digital materials and the impact of the internet have had huge consequences on the publishing industry. Libraries and publishers are inextricably linked and their future isn’t what it used to be. The future used to be quite clearly about books and printed materials but now we must fathom out our future.

The environment in which we operate has changed more in the past decade than in the preceding two centuries, driven by technological developments. Such change is gradually transforming traditional dependency on the physical library into a complex network of options for meeting, reading and learning needs.

I became more and more aware that the library needed to get on board with web 2.0, or risk being left behind in an increasingly digital world. I also saw the free opportunities for promotion that web 2.0 enabled and created a team of people within the library to pull together all electronic resources into one location, whilst also providing a public space for communication and collaboration.

We launched our Virtual Library at the annual EDGE conference in 2010. The portal is unique in that it unites all our digital resources, including catalogues, databases, and other websites, under one single interface (fig. 1). 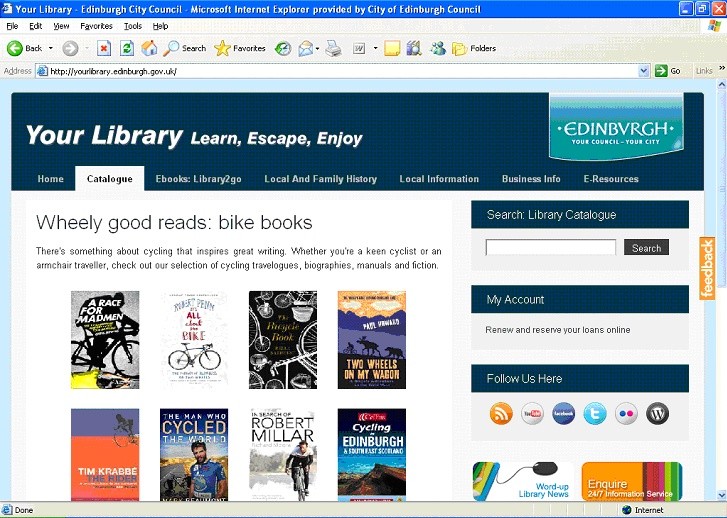 The resulting development of Edinburgh’s Virtual Library was part of the overall transformation programme for the service. The overall aim of setting up the social networks for the libraries was simple: to promote local libraries across the city and to harness the power of the community.

We made it easy to join, renew, reserve, download, use and learn with high quality electronic resources, language learning and driving test learning options are particularly popular. We made it easy to sign up for newsletters and to give feedback across all the content

The top bar, with its tabbed links to the library's resources and services, is consistent throughout the site, as is the branding through the 'Your Library' slogan and the Edinburgh City Council logo. Both the library and the council are trusted brands, and enhance the impression of trust and reliability.

A search box appears in two obvious places, top and bottom of the page, throughout the site. Click in the box and it expands to offer you four options: the site, the library catalogue, Your Edinburgh (a directory of community resources), and Capital Collections (image library). This means that not only are digital resources available in one interface, but also you can search their contents and draw together the results. Our next development will be a single discovery option but at the moment someone looking for books on dementia could complement that search by finding out about support groups locally.

The site also has tiles from which the user can jump off to Capital Collections or Your Edinburgh as well as Word-up, the library's newsletter. Tabs at the bottom take you to a blog, videos, and Flickr photographs. The library already has a good collection of electronic information and Library 2Go, our e-books and audio portal, is very popular with customers.

In providing these web 2.0 technologies that allow for greater user feedback and comments, we can coordinate involvement, invigorate communities and engage with their interests.

We ran social media surgeries to encourage usage and take up, involving neighbourhoods and community groups in the YourEdinburgh element of the Virtual Library. This was an important aspect of the process to ensure that library users could feel a sense of ownership and also to stimulate engagement. The beauty of the development of one cohesive online resource is that those groups who set up their online communities can 'own' these records. In effect this becomes their website, or web presence.

A key element is the Tales of One City blog and readers are encouraged to interact by adding their comments and subscribing to an RSS feed. Content covers library events, exhibitions, new developments, web 2.0, and Edinburgh.

The Facebook site is used similarly to promote what's happening and aims to be even more interactive. The strong branding is continued via a presence on Flickr, the photo site, and Twitter, the microblogging site, and visitors can easily link between each of these online places.

Visitors have been invited to look at and comment on the newly opened Portobello Library via its pictures on Flickr, and there are videos linked to YouTube which feature Scottish authors Michel Faber, Ian Rankin and Iain Banks at Edinburgh City Libraries' events.

Web content is syndicated across the different media so there is no duplication of work but the language is adjusted to suit the tool, or medium. For example, the character constraints in Twitter necessitate a briefer style of getting the message across.

The Edinburgh Library App is a new way for citizens and visitors to find out about the information and services available from Edinburgh City Libraries no matter where they are.

The current version of the app provides a number of key features:

The Edinburgh Library App has been developed to use existing electronic information and repackage it for mobile devices. The Library App uses the same infrastructure and content management systems as the plasma screens we have in community libraries. This infrastructure can also be can also be used to deliver the same content to the Libraries blog, Facebook, and YouTube sites without the need to repackage or reformat for each.

We are currently developing access to the library catalogue for searching, renewing, and reserving items through the app. The app is also capable of providing customers with the ability to send photos and videos, for example of graffiti on buildings, direct to council staff or their camera phone recording of a library event.

Mobile devices are one of the most widely used means of accessing web-based services and content from tweets to downloading music to online games. Apps from sat nav to British Library images continue to be a fast growing element of technology and phones or devices with App functionality are the must have of today.

With this app libraries are moving into up-to-date content management and delivery systems which will prove more efficient in both providing information and reaching potential customers.

The Virtual Library deals directly with any comments and complaints which are posted via the different social media. The response rate is rapid and further improves the library's good public image and enables us to adapt services according to user needs and preferences. All the social media sites can be used as one forum to obtain input from library users on policies which affect us– such as revising our stock policy. One user tweeted, "Edinburgh library case study could grow to be a classic. Impressive roll out and internal buy in."

Local library users can type their postcode or address into the website which will then connect the user to all the services in their area, whether that be library databases, digital images, community groups or the library catalogue, and will very soon link to the NHS patient information. These services are linked to a smart card to access all library services, and complemented with the library newsletter.

Other organisations and groups have recognised that the library is providing information in one streamlined location – a digital one stop shop which has a range of applications for a number of wider council services. This has led to the library receiving greater recognition within the council. The council has in fact been so impressed with the library's practice and innovation in developing the service that the library has taken on the communications role for the council’s communities department.

In the current climate, with so much pressure upon libraries, using web 2.0 resources has given our service a higher profile and shown the library to be innovative, creative and the recognised expert in information management. The service has its sex appeal back.

An increasing proportion of published material is being created electronically rather than in print and already in the UK a very high proportion of academic journal articles are now available online: 96 per cent of journal titles in science, technology and medicine, and 86 per cent of titles in the arts, humanities and social sciences[4]. There remain widely differing expectations of the role of the library but we increasingly function in a world of e-resources, developing virtual tools and collaborative communities. I believe that opportunities abound and I think the economic value of producing locally generated, user-generated content will be crucial.

We need to balance services for income-rich time-poor against income-poor time-rich and, not least, have a vision for what the shift to mobile technology means as we replace the rows of PCs in our libraries.

Digital content and platforms are revolutionising the way customers work, allowing us to store, personalise, manipulate, repurpose and share information with their peers through social, professional and enterprise networks.

What an opportunity for us in the new world where the roles of customer, publisher, library, aggregator and author are converging in information creation and dissemination. Finding ways to improve the way we connect these new technologies to the communities they serve will be the next big challenge for libraries in the 21st century. Our key role will be to continue to promote greater social equity and to reduce the chance of a digital divide but it will be even more important to develop exciting content that will hook or attract those who do not see the need to use the internet.

Liz McGettigan
Head of Libraries and information Services City of Edinburgh Council
"I invite you to join us in Edinburgh on March 1st and 2nd 2012 for EDGE 2012 - Pushing the boundaries of Public Service delivery. Edinburgh has certainly been creative and innovative in a digital world but this conference will also cover wider aspects of public service delivery from creative new building solutions to award-winning innovation in social and community development across the world. Check out this link for an overview of last year's conference http://edge2011.solus.co.uk/. If you would like to know more, to register or to speak please contact grainne.crawford@edinburgh.gov.uk"