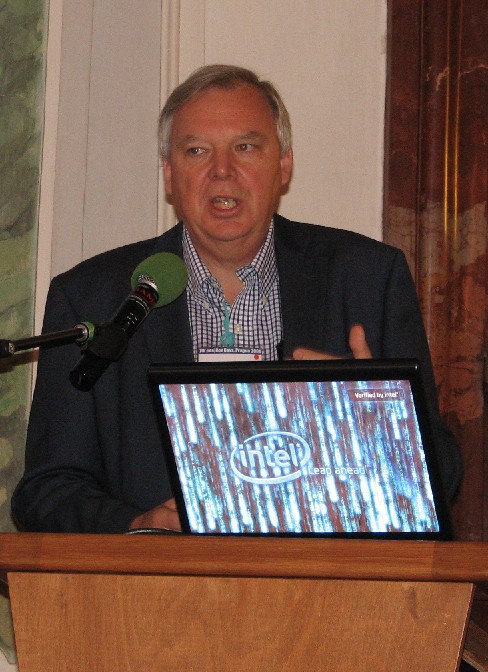 First of all, could you please introduce yourself to our readers?

My name is Andy Mulholland and I joined Capgemini in 1996 with thirteen years of experience in senior IT roles. An early pioneer in PC/Network technology, I focus on Information Technology, as opposed to traditional Computing. I published five white papers, in the last six years, proposed Technology Architectural models, three of which have become the norm throughout the Technology industry, including the concept of ‘Adaptive IT’.

My role Capgemini of Global Chief Technology Officer includes advising the Capgemini Group management board on all aspects of technology-driven market changes. I serve on the technology advisory boards of several organizations and enterprises, including Cal IT (the Californian State Technology Board), and I’m director or part of various industry boards including the Open Mobile Alliance, and the MIT Supply Chain Group, both working on approaches and standards for aspects of the Mobility and Sensors market. I’m also a Fellow of the British Computer Society

In one of your articles you have written about open source software which was described as the route to collaboration. Can I ask then if Capgemini also uses open source software? And if so, what were the main reasons behind the decision to use such software? Could you also give us some particular examples?

We certainly do both use ourselves and help our clients to use open source software because in certain types of requirements, it’s simply the only way to achieve what is required. If you move beyond so called normal IT built round internal requirements and focus on how communities of people do things then several different factors occur. The first is that the environment is non deterministic, how many users, on what machines, etc., so classic licensed software rules could not be applied. Secondly, people in collaboration are interacting, not transacting like machines, so you want to encourage the frequent modification of the capabilities to follow the needs they find as they collaborate more. You can safely do this as it is unlikely there are the same constraints about the integrity of data and procedure. However to do this means allowing access to source code, and so we come to recognize that we are supporting a very different requirement and need a very different approach. Does this mean I am against licensed proprietary software? Certainly not! It is and will remain the necessary way to provision other areas of a business.

There has been quite a discussion about the concept of the Internet of things. If you hear this term, what are your first thoughts?

It is a vague term so my answer may be a little personal! To me the point being made is that anything and everything is involved, not just computers, and rather than list out each type of ‘thing’, i.e. people, sensors, etc., it’s simply easier to talk about the ‘Internet of things’ as an all embracing term. It also gets around the other issue, which is that all the time new ‘things’ appear and get added to the list of what is connected by the internet! This question also allows me to remind people of the difference between the internet for connectivity and the web, which is a particular use of the internet, a point that frequently gets missed or at least muddled together.

In some of your blog posts you have mentioned the use of Yammer, a micro blogging service similar to Twitter, in your company. Which reasons have you – or Capgemini – led to the use of this service? Has it proved useful? Do you think also non-profit organizations (e.g., libraries) could benefit from its use?

It took me a while to really start to understand Micro Blogging, especially as I am not ‘into’ twitter, somehow it simply does not appeal. I suspect it’s because generally I have too many communications going on and I want more focus, and in that focus more information. What I now see is that just as RSS provides a means to ‘follow’ changes on key content so does Micro Blogging allow you to follow ‘changes’ by key individuals. The question is what and how, as well as for what reasons, do you want to follow those changes. Yammer works for me and some 2000 Capgemini staff who are predominately in the technology operations because it allows longer messages, attachments, links to emails and other sources to be combined into focused threads. This allows a much richer environment with out losing the spontaneity of instant messaging, or Twitter come to that. If you can set up your choices of topics, groups and people correctly then you can actually see a reduction in your email! That’s a real win as it means that Micro Blogging is really working as a means to obtain real-time focus on the issues that matter.

You have recently written (or co-written) two books – one on mashup corporations and one on mesh collaboration. Could you please introduce these two terms to our readers and explain their significance in today’s world?

There may yet be a third as this was intended to be a trilogy! In MashUp Corporations, the goal was to show the external market possibilities of combining your products and services with other partners on their web site. It is told as a story of a company called Vorpal learing how to see one of their key products, a popcorn maker, not just through classic distribution to shops in the hope that a buyer would want one, but by placing the machine on sites which led to social events where a popcorn maker could enhance the social occasion, i.e., on football fan sites so that in organising to watch international games at home with friends you could see a offer for a popcorn machine in your team colours. In Mesh Collaboration, Vorpal is now selling many more machines, but as there is more variety in the product lines, it is causing internal organisational problems to run such a dynamic, event driven, opportunistic business. Mesh Collaboration is about the process of adopting collaboration tools and techniques to be able to succeed in this new world. If I get time then the third book will be around value networks, the mechanism by which whole groups of companies cooperate to build and mine whole new value propositions.

Which social networks do you participate in? And what are your feelings about social media in general? I am especially interested in finding out your opinion on mixing work and private life when actively using social networks...

Less than you might think as I am a blog fanatic and follow a wider range of bloggers in active discussions on the development of the new world. Though I suppose in one sense you might say that is social networking but of a highly interactive and content rich kind! I use Facebook for a general tool and in particular publish where I will be week by week as well as using tools that go with this such as DopplR, I guess that‘s me seeing it as a service to use rather than a lifestyle? It‘s the same for LinkedIn which I regard as a defacto service for all business people, after that it‘s some private communites on Ning around various technology topics.

During a discussion at the 7th Eastern European e|Gov Days conference in Prague, you mentioned that people who read e-books (using for example Kindle e-book reader) actually read more than they did before. Is it also your case? And which e-book are you currently reading?

I love to learn things, and am always curious to know more; I see life as a huge jigsaw puzzle and am always looking for more pieces to help me understand the picture. So I have always been a fan of Amazon for the outstanding use of CRM to help me navigate from one choice to another, but it’s a drag carrying loads of books around when you travel as much as I do. Kindle means I have no such restrictions and could be carrying ten or twenty books around with me loaded on my Kindle. Well I suppose it’s a case that if you have constant access you will use it, so I am able to read more, in more places, and therefore I read more books! I think that is probably the same for other readers, if you make it easier and more convenient to do something then usage will increase!

Thank you for the interview!